To exercise interdisciplinary and holistic thought in the fields of: Psychology, Philosophy, the Natural Sciences, and Spirituality, we recommend the two-volume work by: 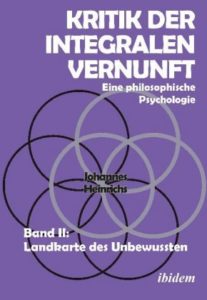 „Criticism,͟ should not be understood in the sense of criticizing or blaming, but rather in the sense of interdisciplinary researching, reviewing, and examining of findings. Therefore as Johannes Heinrichs uniquely connects reflexive, scientific thinking and spiritual insights he develops a condensed criticism of the outer and inner world.

„There is no integral reason as ͞pure reason,͟ that is, a merely thinking reason, because reason, according to its own essence, must also be to intuitively hear.͟ (ibid., p 381). The two volumes acknowledge academics such as scientists and philosophers as well as spiritually-orientated individuals who assume they could exclude the necessary cognitive and thought processes of the scientific world. For nearly a century, the fields Philosophy and practically-oriented Psychology have been separated. Now is the time to rejoin these two sciences.

The focus is on central topics:

In his preface, Prof. Dr. Franz-Theo Gottwald captivates readers by highlighting the uniqueness of the work: ͞Where on earth are the consciousness functions of the human being such as awareness, thinking, sensing, and intuition, but also common idle thoughts as examined in their inner, systematic interconnection? (Forward by Prof. Dr. Franz-Theo Gottwald. ibid. p.11)

The linguistic compoition of the first volume’s conclusion briefly highlights the depth of Johannes Heinrichs consciousness.