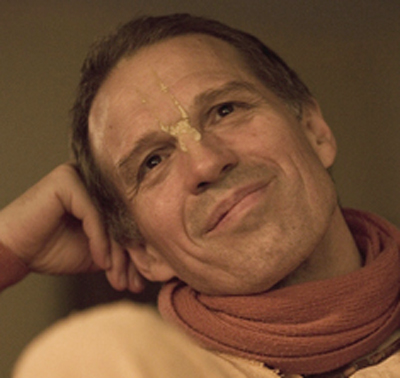 Sacinandana Swami has been a monk in the bhakti tradition for 50 years. He is known for his significant contribution to the practice of contemplation and meditation for modern practitioners. Sacinandana Swami has published eight books and released three CDs, and offers an array of retreats, seminars, and workshops. He teaches at the Vrindavana Institute for Higher Education in India and the Bhaktivedanta College in Belgium. Furthermore, Sacinandana Swami serves as the spiritual guide for the Veda Academy, which is active in eight countries, and in 2009 founded two organizations, “Yoga Is Music” and “Braj Care”. Fon of India’s sacred pilgrimage sites, he annually goes there to seek personal inspiration. Although his pilgrimages have taken him all over the subcontinent, he is particularly fond of the sacred land of Vrindavan, the birthplace of Lord Krishna.